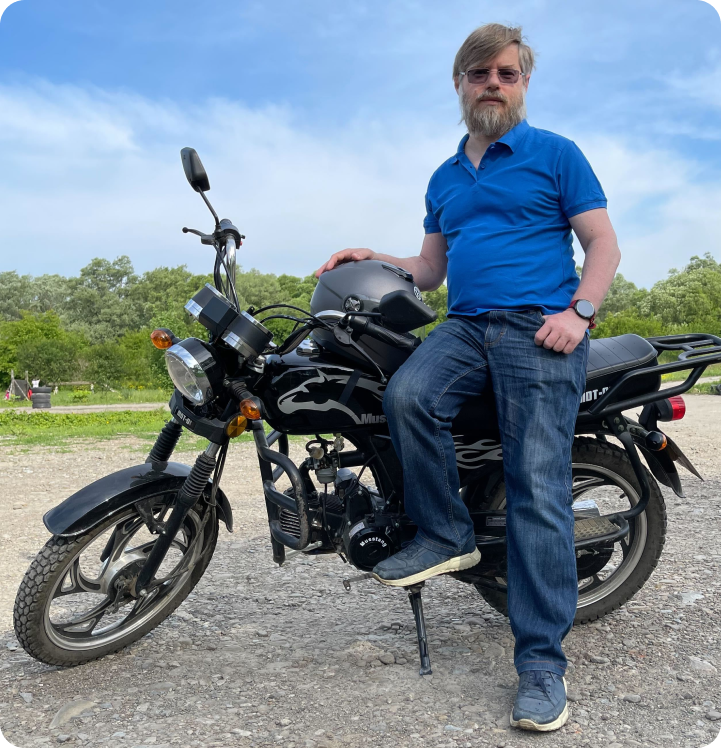 Dmitriy is a professional iOS engineer at Viaduct, whose main responsibilities are creating the best possible iOS applications, including architecture, API, publishing and deployment system, recording metrics and event reporting, maintenance and management of the development process. He graduated from Kharkiv State University in 1997, and Kharkiv Polytechnic Institute in 1998. Even though Dmitriy has been working not for so long at Viaduct, he has very profound experience in software and iOS development, having worked on a great number of commercial projects. His work experience is enormous.

“At different times I preferred various mottos (“Be human”, “Everything is in our hands and power”). I use them to make decisions or explain my deeds. But, it will be more correct to say that these mottos relate rather to my Creed, that cannot be described in just three words, and, despite the fact that it does not require explanation, perhaps, it could be the longest work of the epistolary genre,” says Dmitriy.

“How did I get into the IT profession? Once a groupmate of mine suggested me to attend the course of programming together with him. That was the moment which changed my life. The first commercial project, I worked on, was created in Assembler XT/AT 80286 in 1993. Later, I was involved in the development of applications with a rich graphical interface for gas industry diagnostic systems under DOS, as well as a graphical shell for launching and managing running applications (DOORS’97).

I took part in the development of a large number of non-commercial software products, such as search engines for “emergency psychological help” services, hypertext browser for cataloging reference information, schedule for education staff, implementation of psycho-diagnostic methods (Kelly’s repertory grids, sociometry), an application for approximations of arbitrary curves of higher order polynomials (up to the 19th degree).

When development tools available for Windows first appeared, I implemented a system for diagnosing gas turbines, the “professor-student” application for conducting mass testing of students, and software for transporting goods by logistical companies.

In 2010, I got my first experience in iOS development, and in 2011, I completely switched to the iOS development, and was actively involved in the development of iPad applications for restaurant chains, such as Mafia, Yakitoria, Kharkov TED, Kiev Agile 2011, and a great number of iOS applications in outsourcing companies. In 2017, I got the opportunity to work with Ezlo/Mios home automation systems. And one of my last major projects was dedicated to booking apartments, and keyless access to booked accommodation via a smartphone. At the moment I’m working on an NFT project at Viaduct. At this company I like to have the possibility to build the development process in the most effective way without excessive bureaucratization.

As for my hobbies and interests, a few years ago I was engaged in the archeology of the northern Black Sea region (Chersonesos IV BC – XIV centuries). Now I’m interested in SmartHome automation, kayaking trips, playing the ukulele and motorcycling.

Some of my interests present new challenges to me. My first challenge is English that had to be mastered a long time ago, but there was no great need in it. Today, the issue of using English is incredibly acute. My second challenge is to acquire skills in circuit engineering in order to implement projects using microcontrollers of Esp8266 / Esp32 series. These skills are necessary to achieve my hypothetical goal to become an architect of mobile applications and intelligent automation systems in the future.”